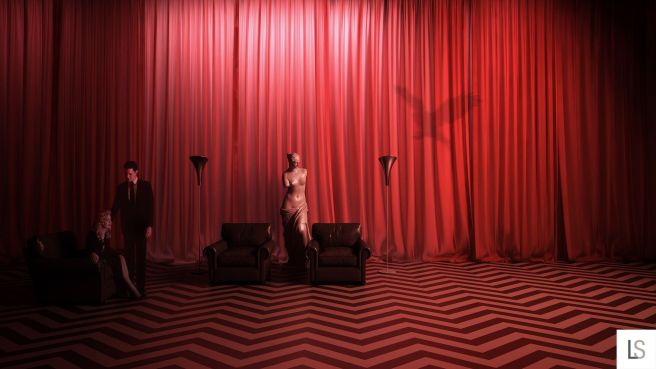 In Twin Peaks, the Black Lodge exists like a fortune teller on Sunset Blvd., representing an ancient backwater mysticism of a town Agent Cooper comes to love while his urbane FBI colleagues scuff at the simplistic turn of the folk town. Faux classy and bleeding sleaze, the red waiting room is filled with circus freaks and gibberish, where the darkest truths are revealed in non-speak. The knowledge that awaits can horrify you, as the spirits, both good and evil, moving through its red cloth walls morph into monsters. It appears in dreams and exists in an unseen dimension through a portal in the woods and leaves behind the bad smell of petrol.

Somewhere on Sanderstrasse, Berlin has its own replica and for reasons unknown to me that was the first place I wanted to go in the New Year. I found myself typing the words Black Lodge into Tinder chats and hearing the words tripping off my tongue since the first day of January as either a date idea or friendly neighborhood bar visit with a girlfriend.

Every time I walked out of u-bahn Schönleinstrasse and tried to go, I’d reach into my purse to find my phone dead, requiring me to depend on someone else’s navigational skills. Each time we ended up circling away from Sanderstrasse. My friend kept walking us straight ahead till we reached a gas station on Sonnenallee (at the gas station I knew this couldn’t be it) and another time, a date escorted me to the canal then around the block and back again.

It was only after I finally made it there that I began to suspect that Berlin’s Black Lodge may not be such an innocuous replica of the imaginary existence of the real thing but by building it an energy had come, a force field of dark intentions and mischief. And that I, led by aesthetics and lack of depth of its true meaning, took myself and another innocent to unravel and reveal ourselves in its darkness.

Berlin’s red room was small and the seating lined its walls creating an enlarged BVG s-bahn bike area sitting arrangement in which you sat not facing your date but strangers sitting on the opposite side. Awkward.

The temptations of my shadow self came out when I recognized someone going to the bathroom. The male version of the girl I wanted to be, someone I saw everywhere from gallery openings to the art library (Kunstbibliothek), in the underground, walking to the HU library, and then in a bar on Sanderstrasse, as I was on a date with someone else.

His style of tweed suits and perfect grooming, carrying his large obscure art books while working on a paper at the Kunstbibliothek had attracted my notice in addition to being my spiritual Berlin art doppelgänger.

In my utter amazement at his sight, I blurted out, “that guy that just walked to the bathroom, I saw him everyday at the Kunstbibliothek for a month.”

I made no reply but thought, he saw me now. At that moment, my shadow self came to the realization that my fairly good-looking date lacked my aesthetic taste in style. I imagined endless days of his musician uniform, jeans and a t-shirt, just as he was wearing that evening.

As I second-guessed my desires, I later realized he was plotting how to make me stop liking him. One telling moment of body language was the clue. He turned his body toward me for the first time that evening and strangely became overly interested when I related a story of how one of my most considerate and nicest friends, slowly got rid of me from her life. The distress in which I told the story showed how much I was still hurt, angry, still stunned, and surprised from the drawn-out death of the friendship. Unknown to me, I had just given him the blueprint to “how to make this girl never want to see me again.” Suddenly after that date, the “great human being” I thought I had met was working hard to get rid of me using the template my had friend chosen in real-time. The knowledge was shocking. What was at first a good first impression changed to face the other direction.

However, it could also just be my shadow self working overtime in thinking these thoughts.

2 thoughts on “In the Waiting Room of the Black Lodge…”