Mostar was special to someone I wanted to be special to. I had a day to create meaning, to find the words to express what I felt, to capture somehow the essence of the city in a photograph and discover what made Mostar so special to that person.  However after a bus ride from Sarajevo, little food and the logistics of arriving at our hotel, by the time we made it to the iconic Old Bridge, I was distracted and tired. I took horrible selfies on the bridge with my equally exhausted friend, bought a bath rug and another tourist souvenir that made no sense, birds pecking on a wooden paddle. Yet like every tourist, I wanted to see more. The tour company in Sarajevo had instilled in me a desire to see the Blagaj Tekke or the Dervish monastery. I saw one photo from their homemade folder and I thought to myself I have to see that. My friend wanted to do the History of Former Yugoslavia and Death tour and I wanted to see all the pretty waterfalls and things surrounding the city. We made an annoying compromise for the tour operator. We decided on one important sight from both tours, the Partisan Memorial Cemetery and the Dervish house, plus an Orthodox church on the way.

Our tour guide spent the most time telling us about the Partisan Memorial. How the Serbian architect Bogdan Bogdanović had designed it to be a place where families came for picnics and children played, our tour guide being one of them. Designed as a luscious garden filled with lavender, now there were broken beer bottles and unused tampons and sanitary pads scattered around, embarrassing our guide. He thought it was planted by the government still trying to oppress them, which I didn’t quite understand and maybe I had mentally checked out to take a photograph and then accidentally melded two separate ideas together, tampons and governmental conspiracy. In between the weeds, he pointed out the names of some of the buried on crumbled tombstones, how before the war, no one thought about ethnicity but after, it became the first thing he thought of when he saw a Serb, Muslim or Croat name. From the memorial we had an almost a panoramic view of the city, and he pointed out a church that was reconstructed after the war, how it was much smaller and more beautiful originally. In the mountains, he pointed where there were still land mines. On top of one of the hills, he told us how the top a steel tower was bent over and hanging, just about to fall down until finally it did, ten years later. Bogdanović was the only Serb to be buried in a Jewish cemetery as he refused to be buried next to possible war criminals. I thought, Bogdan was really cool. The Partisan Memorial was starting to seem special.

We drove to the Blagaj Tekke. Our tour guide had one thing to say. It was founded by mystical Turkish monks who believed in the power of beauty and so they tried to pick the most beautiful spots they could for their monasteries. And that was all folks. 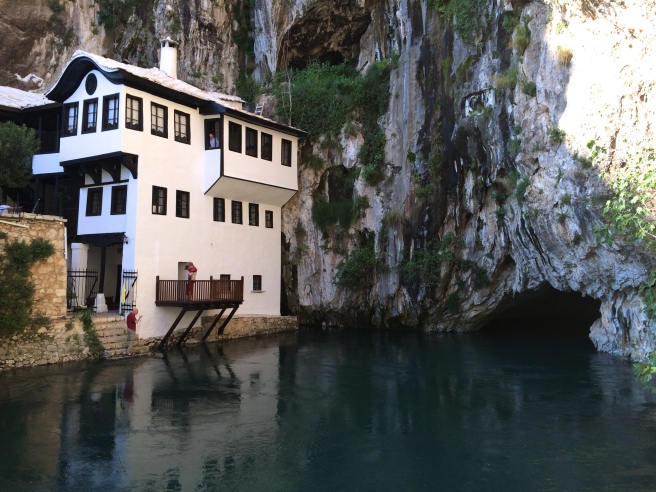 It was one of the few places I visited where the real thing was exactly like the photograph. Well, other than being about to drink the water, go inside the house and see the area around the monastery, etc. But I think the tour guide thought the beauty could speak for itself but it couldn’t.

Back near the Old Bridge in Mostar, we had dinner next to a smaller stream which had even smaller bridges in the same design as the Old Bridge creating an even quainter layer inside the original. I studied the architecture around me and the most descriptive feeling I could come up with was Islamic fairy tale. But I knew this was somehow wrong, fairy tale being German Romantic. Plus I didn’t know any Islamic love stories, plus we were in the Balkans, it just looked Islamic. My friend’s suggestion of  Arabian Nights seemed wrong and Aladdin seemed really wrong. Ultimately, I didn’t have the knowledge, energy, or the time to create meaning or form a connection. The only reason it would be special to me was because it was special to someone else. I only had surface words to convey, beautiful and fairy tale, the poetic remained untold.