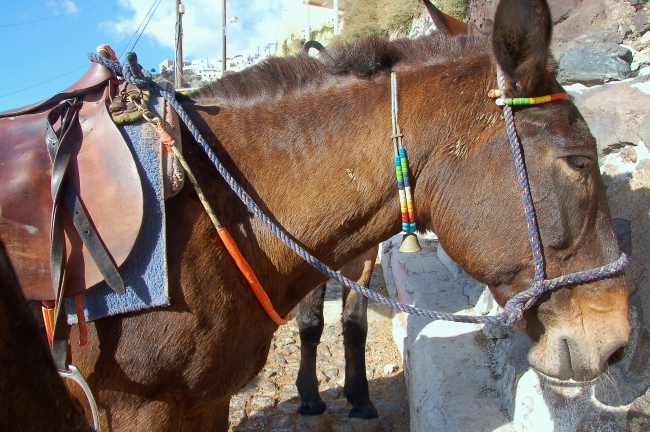 When I had to go down to the port from the town of Fira, the cable cars were closed and there wasn’t a donkey in sight. I had to walk the winding stone steps by foot. It took 30 minutes of stilted strides while speed walking, going down steps designed for donkeys. The step down occurred almost always at the wrong moment, causing you to take a small semi-step before the step down. 30 minutes of this and I vowed never again.

After our boat landed in the port, I headed toward the cable cars while the other 20 American college students headed toward the donkeys. The next cable car was in half an hour so I went to the donkey line. I was at the end. Everyone got on a donkey except for me, an old Japanese lady and 3 American students. The guy in charge of taking the money and putting you on a donkey took us up further to his main station where there seemed to be some reject donkeys, ones a little bigger and seemingly slower than the other normal-sized ones that alertly knew what to do.  The guy put the two American girls on one donkey and to get the second girl on, he had to cup both her butt cheeks and quite ample ones. Next the old Japanese lady got on her donkey, then me and last the American guy.

The Japanese lady’s donkey went up at a slow and steady gait down the middle. Although I was thankful to have my own donkey, I think he might have been blind. My donkey couldn’t seem to walk in a straight line but diagonally toward the outer or inner walls or another donkey’s ass. Every time he would go toward the outer low wall, I tried to steer him the other way to no avail. The donkey however behind me acted like he was narcoleptic and would stop and take short naps and then make up for it by moving faster. The narcoleptic one at one point dashed past mine, brushing past us and causing a three donkey traffic jam.

After many diagonals and bumps, my donkey bought me to the top and parked himself and waited for me to get off. I took the photo above in his parked position.

The other donkeys below. 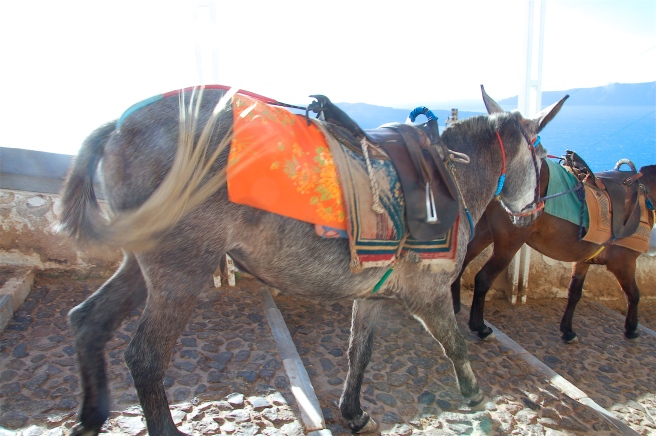