I embarked on a 6 day trip around Turkey in January 2012 with an itinerary designed by a New Yorker friend. She wanted to hit Istanbul, Ephesus, Pamukkale and Cappadacio (that was her shortened version) and the European in me was screaming inside 6 days is not enough for Istanbul. Since her flight cost 5 times more than mine, she won. We never made it to Pamukkale but here is Cappadacio in all its wintery glory.

We took a 10 hour plus night bus ride with a bus company we initially thought might be shady but they were the only ones with seats left.  I was surprised so many people were taking a night bus toward Cappadacio in the dead of winter. Right when the bus started moving, the guy in front on me reclined his seat back to where his head was almost in my lap the whole time. Snow was falling and I was staring out the window pensively as if I could alert the driver of a pending accident. As the night wore on, he began driving down the middle of a two way road, only moving over when he saw an oncoming car. This kept me even more alert. We even had a bus hostess who looked Eastern European and very tired. She offered powdered coffee and tea with a snack at some odd early morning hour. 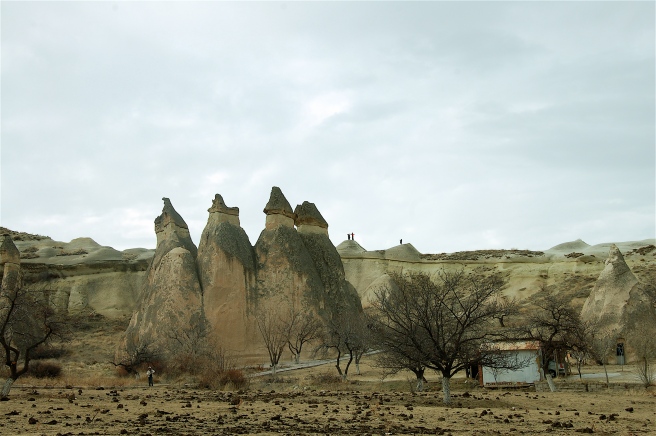 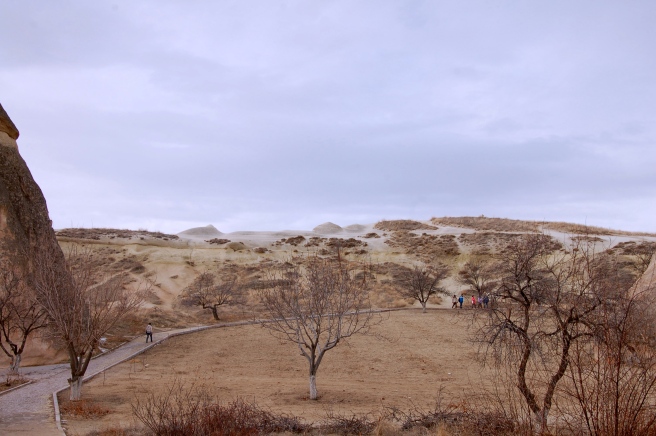 Since this area was known for its ceramic pottery, we visited a work studio and showroom in which I attracted the full 40 minute attention of a salesman who tailed me until I finally bought a discounted 50 euro hand-painted bowl, one that fit inside the palm of my hands. He explained that each layer of design represented a different generation in the family, seven generations in total. Later on that evening back in the hotel, I kept taking the bowl out of its packaging bewitched by its beauty. I was thankful he had forced me to buy it. Nothing on the streets of Istanbul compared to the artistry of my bowl.